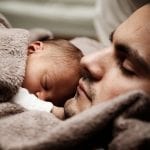 Being held with a mother or father with skin-to-epidermis contact minimizes how strongly a new baby baby’s mind responds to an agonizing medical jab, discovers a brand new study led by experts at York and UCL University, Canada.

The scientists report in the European Journal of Pain that there is more activity in the brains of newborn babies in a reaction to the pain whenever a parent was having them through clothing, than without clothing.

Joint senior writer, Dr Lorenzo Fabrizi (UCL Neuroscience, Physiology & Pharmacology) said: “We’ve found each time a baby is placed by their mother or father, with skin-on-skin contact, the higher-level human brain processing in reaction to pain is dampened somewhat. The baby’s mind is also employing a diverse pathway to method its a reaction to pain.

“While we can’t confirm perhaps the baby actually feels fewer pain, our results reinforce the important function of touch between moms and dads and their newborn children.”

The scholarly study involved 27 infants, 0-96 times born and old premature or at term age, at University College London Hospitals. The scientists were measuring their reaction to an unpleasant but clinically required back heel lance (blood test). Human brain activity was documented with EEG (electroencephalography) electrodes added to the scalp.

The researchers unearthed that the initial brain a reaction to the pain was exactly the same, but since the heel lance elicited some four to five waves of brain activity, the later waves of activity were relying on whether the baby occured skin-to-skin or with clothing.

Joint senior author, Professor Rebecca Pillai Riddell (Department of Psychology, York University, Canada) said: “The slightly delayed response was dampened if there clearly was skin experience of their mother, which implies that parental touch impacts the brain’s higher-level processing. The pain will be the same, but the way the baby’s brain processes and reacts compared to that pain is dependent upon their connection with a parent.

“Our findings support the idea that holding a baby baby against the skin is important for their development.”

The brains of the babies that remained in the cot or incubator also reacted less strongly to the pain than those held in clothing, nevertheless the researchers say which may be because the babies weren’t disrupted by being acquired before the procedure, otherwise as a result of success of the sensitive, individualised care these were provided.

The babies’ behaviour wasn’t significantly different involving the groups, even though the skin-to-skin group did exhibit reduced responses when it comes to facial expression and heartbeat slightly. Other studies are finding that skin-to-skin experience of a parent does affect baby behaviour, and might reduce how they answer pain strongly, but those scholarly studies failed to investigate mental performance response.

In the present study, the babies’ brain responses are not only dampened in the skin-to-skin group, but followed an alternative neural pathway also.

First author, Dr Laura Jones (UCL Neuroscience, Physiology & Pharmacology) said: “Newborn babies’ brains have a top degree of plasticity, those born preterm particularly, and their development would depend on interactions using their parents highly. Our findings might lend new insights into how babies figure out how to process threats, since they are sensitive to maternal cues particularly.”

Co-author Dr Judith Meek (University College London Hospitals) said: “Parents and clinicians have known for several years how important skin to natual skin care is for babies in NICU. We have now been able to show that this features a solid neurophysiological basis, that is a fantastic discovery.”